Did my Baby Knock me Down? 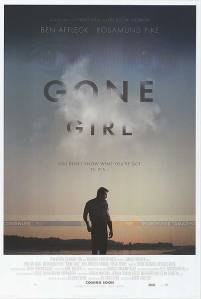 Hands down the most talked about novel of 2012, Gillian Flynn’s Gone Girl hit theaters across the globe in October. Taking on scripting the adaptation herself, Flynn’s work got dream team treatment and thankfully lives up to the page turning anxiety her novel provided. Sitting down to a second viewing of the film I discovered more reasons to love and loathe both of her leads.

Stepping out from the Argo shadow (and a few non-performers in between), Ben Affleck gives his best performance since…well awhile. His star persona is clearly drenched in paparazzi fodder and segways well into his character, Nick Dunne. Discovering his wife has disappeared, Affleck’s Nick calls the cops and quickly experiences the evolution of husband-as-killer while he slowly discovers more about his wife than he might have imagined. Not to be outdone, British actress Rosemund Pike (whose worked steadily for years, but this is definitely her breakout) brings incredible skill to her performance of wife Amy. Calculating at every moment Pike’s Amy is unreadable, untouchable, and Flynn’s script aids both actors in giving them both untrustworthy point of views. The protagonist and antagonist discussion would take days.

Fincher and recent collaborator, director of photography Jeff Cronenweth (2010’s The Social Network and 2011’s Girl with the Dragon Tattoo), have continued success here with Gone Girl. Their representation of small town America, where the trauma bleeds against monotonous suburban existence, is fully realized in their shot composition. The camera encroaches on Affleck’s Nick like a nosy neighbor and emphasizes his body throughout the film. The sound editing aids in the menace of the plot with certain noises put in direct relief to stark silence.

Rounding out the cast are two memorable female performances. Carrie Coon as Nick’s twin Margo whose main narrative function is to react to Nick’s plight and align the audience with her own distress at the plot twists. However, Coon acts as not just tragic relief here, but as a physical dichotomy to Affleck. Kim Dickens as the lead detective on the case is also excellent and true to the novel. Flynn’s script for the most part does her work justice, if not slimming down certain elements to create a more concise map for Fincher. My main gripe is that the segment with Desi Collings (played by Neil Patrick Harris) is sped up and Amy’s parents are far less a factor in the narrative.

Ultimately Gone Girl succeeds the way the novel did, with multiple points of view and questioning the authenticity of voice and body. It deconstructs the constructs of marriage from many angles while never endorsing one. Gone Girl‘s very instability is insatiable right down to the last page or shot. I wouldn’t call the film shocking, since I read the novel, but even then a he-said/she-said killer thriller is so over done any new take feels fresh. And I like fresh.

2 thoughts on “Did my Baby Knock me Down?”