Sleeping with the Obvious 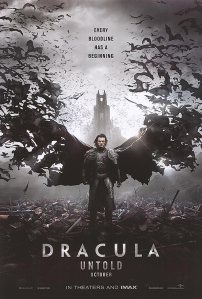 It is such a struggle to find new words for origin stories or re-imaginings. Re-telling would be best as odds are there is hardly anything creative about these endeavors. Another film has entered that group this fall.

Dracula Untold is one of those packaged and ordered studio films that must come out of audience testing and market forecasting. First time director and writers amply bring you into the world of their story, but it’s not a very dynamic one. Vlad aka Dracula’s (Luke Evans) grapples with the thematic black and white, but he is so coded as the reluctant hero that there are few surprises to be had.

Flanked by his referential wife Mirena (Sarah Gadon) and son Ingeras (Art Parkinson), Evans’ physical presence is felt onscreen, but there’s not much weight to it. Gadon is the only woman in the film and she is so understanding and ultimately, sacrificial, that she becomes a pawn of the script. Evans’ dealings with Dominic Cooper’s Turkish Sultan also lack any tension and Cooper’s pomposity must be from a giddiness from his paycheck, not his work. The only fun moments are from Charles Dance (known notably for his work on Game of Thrones) who plays the mountain trapped master vampire. His Lannister voice is chilling and his make-up will make you squirm.

Similar to 2010’s Clash of the Titans, Dracula Untold has big britches. The volume is high and obvious, even the bat imagery is there and used repeatedly. But what is actually insulting is in its title. There is noting untold or secretive or to be seen about this film. Everything, down to its bare themes is clear and boring. This Dracula deals not in shadow, but in heavily painted darkness.